Beef Salpicao is a dish made of cubed sirloin or tenderloin beef, marinated in garlic, Worcestershire sauce, olive oil and soy sauce. As expected, the dish came from Spain but it may have originated from Portugal. Salpicao in Portugal is a type of sausage seasoned with garlic, wine, and ground pepper. 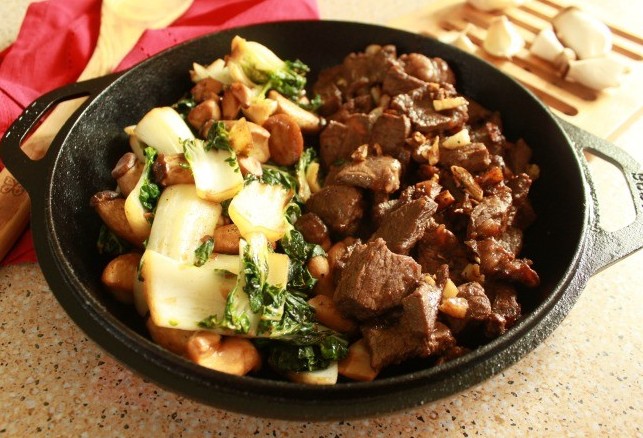 In the Philippines, this is usually served at restaurants with garlic fried rice. The more popular way is to serve it on a sizzling plate as appetizer for beer and other kinds of alcohol.

What is Worcestershire Sauce?

Worcestershire sauce (pronounced ‘woostersure’) was invented by two chemists from Worcester, England sometime in 1837. The last name of the chemists are, guess what? Lea and Perrins.

The sauce is made from anchovies fermented in vinegar. After 18 months, the mixture is combined with onions, garlic, chili peppers, salt, sugar and some secret seasonings that they never revealed.

This recipe does not sound very appetizing but in fact, the resulting sauce is very savory and is a versatile sauce or cooking ingredient.

If you want to go further back, the idea probably came from Garum, a fermented fish sauce used in ancient Rome, Greece and Byzantium.

This sauce was probably introduced to the Philippines by Americans. In Japan, this sauce is known as tonkatsu and is used as dipping sauce for fried pork cutlets.

However you call it, Filipinos love this sauce and call it ‘Perrins’. It is used as marinade, as dipping sauce or cooking ingredient.

Beef Salpicao is a dish made of cubed sirloin or tenderloin beef, marinated in garlic, Worcestershire sauce, olive oil and soy sauce and quickly stir-fried and served. Sauteed bok choy  is bok choy cooked with ginger, soy sauce and a little sesame oil, if you like. I prefer to use baby bok choy as it is more tender and easier to cook.

Serve the salpicao and bok choy immediately after cooking. It can be eaten with rice or noodles. Or, as described above, put the beef on a sizzling plate (heated in the oven) and serve as appetizer. 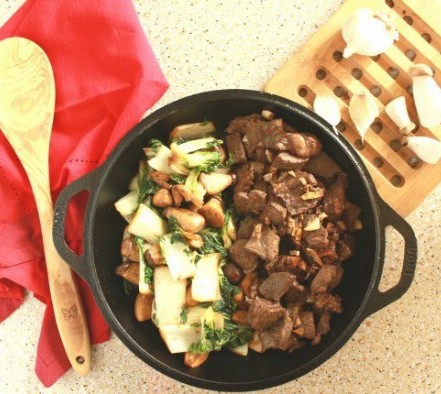 Beef is loaded with protein and other nutrients which our bodies need. The problem is it also has saturated fat which is bad for the heart. The answer is to keep it lean, use tenderloin or sirloin instead of the more fatty cuts like rib eye.

Limit yourself to an average of about a pound of beef a week to keep your body healthy.

This dish is heavy on garlic. Garlic ha a lot of medicinal properties and  was prescribed for different illnesses in different parts of the world. It has a lot of nutrients and very good for the digestive system. It can help your body fight the common cold and the flu. It can lower blood pressure.Supplements can help with this but it has to be equivalent to eating about four cloves a day.

It can lower blood cholesterol thereby reducing your risk of heart disease. it can improve bone health and reduce the risk of Alzheimner’s or dementia.

Bottom line, it is good for you and it makes food taste better.

Bok choy is a vegetable first cultivated in China thousands of years ago. It is part of the cruciferous vegetable family (which includes cabbage and kale) so it has a lot of anticancer properties. It has proteins, dietary fiber and almost all the essential vitamins and minerals.

Now, it is actually considered the top superfood, replacing kale and spinach. It can fight cancer, help with bone density. It has antioxidant properties which combat diseases. The selenium in bok choy fights inflammation in the body and hinders the growth of tumors.

What do You Think?

Are you making the salpicao as a meal or as an appetizer?  Either way, I think you will enjoy it. You can reduce the amount of beef by adding mushrooms while cooking. You can also use it as hot topping for a mix greens salad.

It can be packed for meal prep with the bok choy and some steamed rice.

The bok choy recipe is vegetarian and is good for you if you do not eat meat. Eating bok choy regularly is a good part of your health arsenal. It is very easy to cook and tastes better when it is half-cooked (2 to 3 minutes at most). It does not have a strong taste, even slightly sweet, so it blends well with most dishes.